The way we view life and the world around us is unique to our experiences and personality.   It’s hard to remember and make the concentrated effort to change our perspective, but if we can manage it the results can be more than worth the effort.

It’s both as simple and as complicated as changing our dominant hand.  Only about 1% of people are naturally ambidextrous.  Many people, such as myself, can write legibly with both hands, but writing with the non-dominant hand often feels unnatural and takes more effort.  Most people can train themselves to use both hands, but this too takes a concentrated effort.

One of the pitfalls of being in the majority (in this case right-handedness) is that you forget about the minority (about 12% of people are lefties).  This allegory can apply to many perspective issues and has taught me to rethink the way I approach the world.

My mother and sister are left-handed.  Having grown up knowing with lefties, you would probably assume that it comes naturally to me to think about the needs of the left-handed persons of the world.  I found that my own awareness didn’t make me more observant or proactive though.

Sure, I would have no problem sit on whichever side of the booth you want me to allow for elbows.  I would sign a petition for schools to provide more left-handed desks for students.  From my perspective, as a right-handed person, I never noticed that it was always the responsibility of the lefty to request accommodations.  Many lefties of the world just make due rather than address the issue, which I never really thought about until the case of the scissors came up. 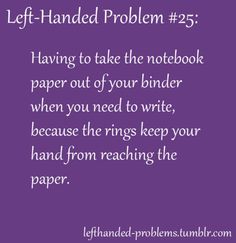 The Case of the Scissors

At my previous job, one of my responsibilities was ordering office supplies for new employee hires.  Among the many things I ordered on a regular basis was scissors.  It wasn’t until one of my coworkers was complaining that her left-handed son was being forced to buy his own left-handed scissors for work (the scissors were necessary for his job tasks), that I ever gave it much thought.

After expressing my agreement that it was ridiculous, a couple of my fellow co-workers related similar experiences as lefties.  I realized that I had never considered asking new employees about their dominant hand all of those times that I placed orders for scissors.  They rarely used the scissors in general, but to me…that didn’t matter.

It mattered that I had been making decisions for other people based on my own perspective and experiences.  I never even thought twice about it.  I remedied it by ordering them new scissors and pledging not to order scissors in the future before asking the new hires their preference, but never really thought deeper about it. The Other Hand at Home

Earlier this month, my son’s therapist mentioned that he appeared to favor his left-hand for many tasks.  Despite my realization at work that I should question my perspective, it didn’t trickle over into my life the way you would hope.

Granted, hand dominance normally emerges and is set by age 5, so it’s possible that I didn’t notice previously because it was still emerging.  After the therapist mentioned it to me, I noticed that she was right.  He favors his left hand in many tasks (not all).  For someone who commonly learns by hand-over-hand methods, I realized that we needed to change the way we interact with him.

I have to remind myself to use my left hand to help him brush his teeth, use his fork, and write letters.  It’s challenging for me, so I can’t imagine how difficult it would be for someone without the ability to use their non-dominant hand productively to accomplish.

I am sure that the universe was growing tired of throwing hints in my face, but this seemingly random chain of left-handedness has really begun changing my perspective on many things.

I consider myself to be fairly introspective and self-aware, but even I am not immune to ignorance.  Even trying to be understanding and helpful, it’s hard to break through our own experiences and approaches.

It sounds cheesy, but the lessons that can be learned from it are endless.

It is easy to ignore things that don’t affect you directly and/or to remedy the little things that you feel you can help with.  It is much more difficult to step into someone else’s shoes to figure out if they actually need your help, what you can do to help them, and to be willing to change the way you do things to help them.

2 Replies to “On the Other Hand: A Lesson in Perspective”