The terms used to describe autism are often deceptive.  Disorder, Deficit, Impairments.  These words imply that the autistic brain is wired incorrectly, rather than wired differently.

Autism spectrum disorder (ASD) is defined as a neurological disorder.  ASD is identified by deficits (or non-typical levels) in social interaction, along with restrictive/repetitive behaviors.  ASD may or may not include language impairments, mental impairments, or genetic factors.

For some individuals with autism, these terms are important, because they help them to obtain much-needed services and support.  However, for many people, they become hurdles to social integration and acceptance in a world where they are already struggling with social communication.

The Trouble With Calculators

It reminds me of my high school chemistry class.  In school, everyone had a fancy (and expensive) TI-83 or TI-85 graphing calculator.  I got my older sister’s hand-me-down off-brand graphing calculator.  My calculator had the same abilities and functionality as the TI brands, but that’s not the one that was being used by the school.

I was expected to keep up in class and to get the same results on my calculator that everyone else was getting, despite the fact that mine was completely different and not taught to me in any way.  I couldn’t keep up with the rest of the class, was embarrassed that I didn’t have the same calculator everyone else had, and frustrated because nobody else knew how to help teach me to operate the one that I did have.  As a result, I almost failed chemistry.

Someone might say that I had a “deficiency” due to my lack of the typical calculator.  True, not having what everyone else had didn’t do me any favors in that class, but I still had the same capacity for understanding.  My abilities were being limited, not by a lack of functionality…but by the lack of a common tool.  If they’d taught the class on my knock-off version, I would have done MUCH better. 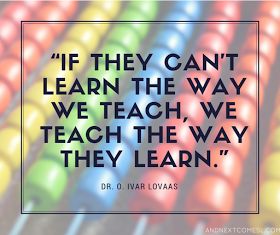 Autism is similar to this in many ways.  A “deficit” is perceived as having less of an ability than the norm; but, often it’s not an issue with ability.  It’s an issue with a cultural/social compatibility.

If everyone is being taught a skill or concept (in this example, Chemistry) using the a single and “typical” tool or method (graphing calculator), then anyone without that tool or the ability to replicate it is at a disadvantage.  If my calculator had been the one everyone was taught on, those using the TI-85s might have been the ones struggling instead.

An autistic individual might struggle read and understand facial expressions.  People with autism have different ways of learning, paying attention, or reacting to things (a different calculator).  As a result of these differences, they might be perceived as lacking emotions or empathy.

Some people, autistic or not, would struggle with chemistry regardless of the tools they did or did not have.  Sometimes, it is an issue with capability.  For me, even if I had a TI-85, I probably would not have gotten an A in high school chemistry, but I definitely wouldn’t have almost failed.

I am pretty sure I only managed to pass with a D because I went to after-school help sessions and cheated off the students next to me (thanks for helping me unknowingly, Sean Miller and Carrie Phillips).  Nobody ever suspects the nerdy girl with glasses to be the one cheating off the football player’s test paper.

No.  My comparison doesn’t apply to everyone, but one thing that does is the WAY in which we talk about autism.  Some individuals, such as my son, require very substantial supports due to his limited capabilities.  However, I don’t consider his autism as a “neurological disorder,” because to me it is a “neurological condition.”