As the mother of a second-grader in the middle of February, I am noticing a few things I dislike about how Black History Month is addressed in schools.

This month, he brought home some worksheets about various different historical figures, such as Harriet Tubman and Jackie Robinson.  Together, we helped answer the questions together about them.  He felt a connection to Harriet Tubman because she is also from Maryland (to an 8-year-old that is relatable).  But there was something missing from his homework.

Although he was being introduced to some amazing people who had a profound influence on our country, he was not being introduced to their foundations.  His homework mentioned slavery and segregation, but didn’t teach him anything about what that meant.

Learning About Slavery and Segregation

It was after talking about Harriet Tubman and trying to explain the concept of the Underground Railroad that I realized it.  He doesn’t know about slavery.  Not enough to grasp why people would need to run away or form a secret network to help them do so. Not enough for him to appreciate or understand how amazing some of these people he is learning about ARE so great.

Obviously, learning about slavery has to be done in an age-appropriate manner. Using concepts that the students can understand and relate to.  But, it needs to be done.  Both at school and at home.  In every American household.

Much like we are slowly introducing Rosa Parks, Ruby Bridges, and George Washington Carver to our children, we must slowly teach them about slavery and segregation.

Christy Crawford has a great post on Scholastic about dealing with some of the common issues educators face when Teaching About Slavery in the Elementary Classroom.

I am not a teacher.  I am a mom.  I do my best at home to introduce and discuss topics like this.  It’s possible that his teacher(s) have already started an introduction in the classroom, but it didn’t stick because my son was too busy thinking about who to play with at recess.  That’s why it’s important to keep the conversation going at home.

Not only does it reinforce things they learn at school, but it opens up the door for questions.  If the child is anything like mine, they are probably paying half attention because their mind is on other things.  Discussing these things STILL lets your child know that you are open to talking about it and answering questions.

As a parent, you also know what concepts your child will be able to understand more easily.  Even if your explanation is oversimplified at first, don’t discount it.  It’s often hard for children under 10 to see complexities.

As Frederick Douglass one said, “It is easier to build strong children than to repair broken men.” 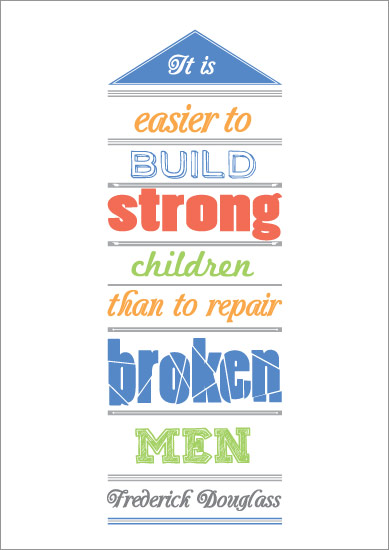